Farmers used to hitch up the horses and plow the ground for planting each spring.  Ground that had laid dormant all winter was turned over for that fresh-earth smell and dark brown fields that set off the bright green of new leaves and azure spring sky.  Its such a pretty picture!  This is the field in front of our house.  Not so pretty.  In fact, you could say that this is farming ugly!

“Farming ugly” is a phrase coined 25-30 years ago when agriculturalists discovered no-till farming.  Instead of breaking up the ground into pretty fields farmers learned to plant into the ground just as they had left it in the fall.  Corn is planted into bean stubble, beans are planted through corn stalks.  This prevents soil erosion.

Here you see what might be confused for wheat or grass; its actually rye.  We planted rye on several fields this year to act as a cover crop.  Some homeowners might plant grass seed each fall to prevent weeds from growing in the empty spaces on their lawn.  This is the same idea.  Weeds can’t grow where the rye is and the roots hold the soil in place until the soybeans grow big enough to do that job themselves.  When its time to plant the tractor and drill just run right over the rye, smashing it and allowing the dead plants to decompose into rich top soil farmers prize. 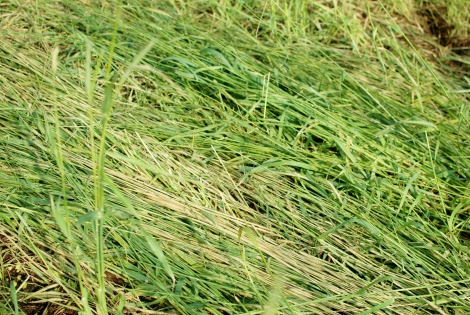 The great thing about rye is it also has a natural toxicity that kills some new weeds that might like to find a home in our fields.  The bad thing is, this is really farming ugly!

These are the marks from the drill. The seeds are dropped in these trenches.

A few days ago I was perusing the Internet when I came across a controversial food article.  Many of the comments left to the writer were furious; not at the author, not at the blog, but at farmers!  One in particular struck me because “Kevin” stated emphatically that big farmers don’t take care of the soil.  It made me wonder– did Kevin know a lot of large-scale farmers?   Did he watch them purposefully destroy the earth from his front porch or was he generalizing “Big” as “bad” with nothing but a “feeling” and some YouTube videos?

I bet you’d be surprised at how many BIG farmers really do care about the land.

After all, it belongs to us!

4 thoughts on “Farming Ugly! Farmers Taking Care of the Land”