Hello from San Antonio!! I’m sitting at the trade show the American Farm Bureau explaining to interested parties how our “Where does your pizza come from?” field trip. (Well, okay, I’m typing a blog post right now, but I’ve done tons of explaining the last 24 hours!)

The conference is been great so far! We arrived in good time on Saturday and got our booth all set up. 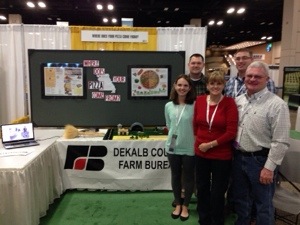 We had a chance to eat at a Mexican restaurant, and walk a little along the Riverwalk before bedtime. Sunday morning we were up and at ’em for the start of the conference. Bob Stallman gave his opening address, and I was super excited to hear him mention data protection rights.

Not the data protection is a particularly interesting subject, mid you, but this all came about directly because of Daddy! Daddy uses lots of Precision Planting equipment in the spring. These companies were recently sold, leading to some concerns that he brought to the attention of the state Farm Bureau organization. They thought the concerns were pretty important as well, so they brought it to the attention of the national organization. And yesterday the president of the American Farm Bureau brought it up as a main point in his speech. Way to go Daddy!

I hadn’t known to expect it, but Missouri was also given another honor during the speech, and the University of Missouri was recognized as the home of FAPRI and Dr. Womack. Dr. Womack is known as the number cruncher for the United States Senate Farm bill. He’s done a great job, and it’s kind of a big deal for all of us here in Missouri. 🙂

We met Bob Stallman this morning, and got our check from him! (And our certificate. But let’s focus on the important things!) I also met a woman from Monsanto who helped with the new commercials. More on that later! I’ve given a radio interview and our county president has been filmed for TV. We’ve met a ton of people gotten many new ideas.