Organic vs GMOs- What Are They?

Have you ever entered the conversation a little late and had to bluff your way through a discussion like you knew what was going on?  Maybe you’ve heard the talk surrounding a news story but never learned the bases for it all.  And then sometimes you’re the person talking in acronyms and using insider phrases while others nod their heads.

I’d guess we all do some of both.

A few weeks ago I posted about Cheerios and their switch to becoming GMO-free.  To write this post I did some research on the General Mills website and read the comments of many people on both sides of the issue.  I also read some comments by people who didn’t seem to have a side in the issue because they really didn’t understand the issue at all.  That got me wondering. How many people are bluffing their way through this conversation? So if you missed the original news story, I’ll try to break it down for you.

GMOs are Genetically Modified Organisms, which means their DNA, their genetic code, has been selected on purpose.  Many argue that farmers have been modifying plants since nomads stopped following animals herds and stayed in one place long enough to grow a crop.  Farmers could look for the best plants, plants that had characteristics they wanted in their crops, and choose that plant to gather seeds for the next season.  Interestingly enough, it wasn’t always just plants that grew the most food (although yeah, that one is popular!) but crops with strong stems or the ones that did best in the climate.  Back when crops were gathered by hand it was even a good thing if the grain fell easily from the stem– something we try to prevent today!  Its not a great leap to suggest that none of the seeds we have today have the DNA they had 7,000, or even 150 years ago.

Obviously, that’s not what all the GMO fuss is about.  Today scientists have the ability to map the genetic code of organisms from potatoes to people.  Using all kinds of technology– as well as vocabulary, that is way beyond my educational training (although I did try to explain it in this post) it is now possible to choose the bits of code you want and put it into a seed on purpose.  That is what a GMO is.

Interestingly enough, being organic has almost nothing to do with being a GMO and here’s why.  Creating GMOs is a massive undertaking.  We’re talking time, money, facilities, brain power.  For that reason and many others there are only eight GMO products you can buy today– corn, soybeans, cotton, sugar beet, canola, alfalfa, and papaya, with rice right around the corner. (If you’ve overheard some of the GMO debate you might have heard that China has banned GMOs, but they actually have GMO sweet peppers and tomatoes there.)  Meaning everything else is organic?

Well, no. Organic isn’t related to the DNA of the seed, but rather the way the seed is cared for as it grows into a mature plant.  Modern farming practices involve protecting plants from insects and weeds with products that are sprayed or applied to fields and crops.  Organic refers to the types of products used.  A common misconception about organic foods is that they are grown with no products at all, but unless you either grew it yourself or talked in detail with the farmer who did, this is probably a false assumption.

If you farm for a living you’re going to need a product to sell.  And no one wants to buy apples with worms, no matter how organic they are. The USDA (that’s United States Department of Agriculture) certifies food as organic.  You can go to their website to see the list of approved products organic farmers can use.  Some products are the same as non-organic farming, but require the farmer to receive training about how to apply the products.  It can also take several years to qualify as organic, since products used on the soil in previous years can count against the organic certification.

So generally speaking, pretty much any plant can be grown “organically,” while only a few plants are GMOs. 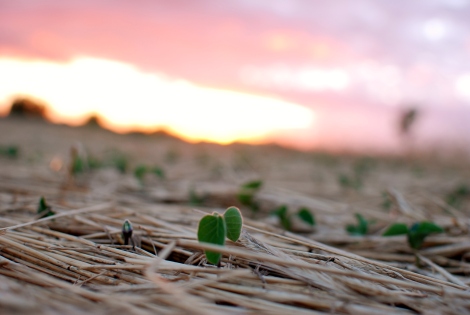 We grow GMO, non-organic beans on our farm, but we use farming practices like growing rye grass as a cover crop to enhance the soil and prevent weeds.

Since this is my blog and I get to write about what’s interesting to me, I’ll add that one goal of GMOs is to create plants that don’t need to be protected from insects because they have their own resistance in their genetic code.  Just an interesting side note! Well, there you have it– the highlights of GMOs and organic foods.  The food debate might well be one of the most important we have in this century.  And now you come to the table informed. 🙂

10 thoughts on “Organic vs GMOs- What Are They?”