This is our wheat field.

There are different ways to grow wheat, but on our farm we plant it in the fall when the wheat has a chance to germinate and grow just a little before the cold weather sets in.  During the coldest months wheat hibernates and then with the first rays of spring sun the little sprouts are ready to green up again.

Or they’re supposed to.

The reality of this year was the POLAR VORTEX.  Snow flurries began just days after the wheat was planted and the spring sun, well, we’re still not sure its around to stay.

Which means an entire wheat crop has been lost. 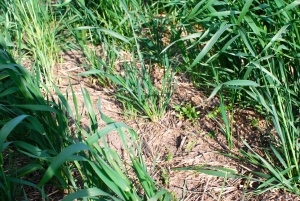 We brought out an agronomist and the insurance adjuster to look at the fields.  Both pointed out that, besides the bare spots where no wheat is even growing, the plants that are growing are not healthy and only a third will develop wheat berries.  Of that third almost all are developing wheat heads that are growing sideways instead of straight up.  That means they won’t pollinate well, loosing another third of whatever crop we might have had.  Then there is the matter of the plants being small and stunted, meaning the combine won’t be able to pull the crop into its reel and we’ll loose even more grain.

The end result was estimated to be less than 2 bushel of wheat per acre. 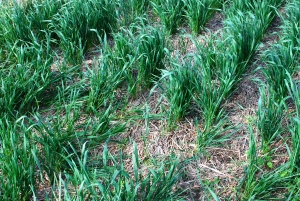 Yeah.  That’s about the same as nothing.

Thankfully we will be able to kill the wheat (the lingo is “burn” the wheat) and go ahead and plant beans in those fields.  It will hurt most where we planned for a wheat harvest in June so we could repair terraces in the summer.  Beans won’t be harvested until after repair work is over, meaning these fields will wait another year. 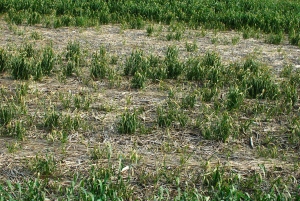 But farming has always been a risky business and we knew that before we planted wheat last fall, or before we planted crops the previous spring, and even before we ever began to farm at all.  Every year is uncertian; every crop is just hope.

Every day is a gamble for a farmer.

A Quick and Easy Way to Link Your Kids to Agriculture

I only recently learned about this quick and easy way to link you kiddos to agriculture.  And when I say quick and easy, I mean really easy, which is my favorite kind. 🙂

All you need is a milk jug and Internet access. 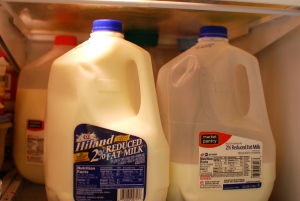 I’ve got Hiland and the Target brand in my fridge right now.

The website, www.whereismymilkfrom.com provides a space to enter the number printed on the milk jug, and viola! up pops the exact location your milk was processed!  This will work with other dairy products too, like sour cream or yogurt.  Anyone in your family picky about milk brands?  Try entering numbers from different brands.   You might be surprised at the results!  In my area milk from Hy-Vee, Walk-Mart, Cameron Mart and Target all come from the same place!

You’ll need the 4-5 digit number printed near the expiration date.

If your kids really get into this project try some less common milk products, like canned milk.  These can travel farther and fewer processors package them, so the results can pull up some fun, far off places– like Iowa! 🙂

Leave me a comment, where does your milk come from?

6 of the Cutest Chicks Ever!

So our project is still working and you’ve got to see these pictures! 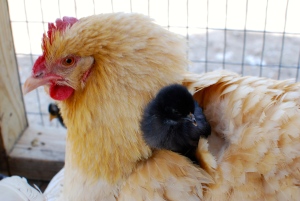 Gives new meaning to “Mom’s Taxi Service.” BTW, this chick does this all the time!!

So warm and cozy under here!

This pic makes me laugh; it’s such a “big” chicken face for such a little girl!

The mamas spread out their wings for the babies to huddle under– these two hens have been working together to make one big mama blanket!!

At two weeks old these banties are still so tiny!