In my last post I told you why I’m voting Yes for Missouri Constitutional Amendment 1.  And before I continue I should probably tell you where the money comes from on the “Yes” side.  Here ya go:

Plus a whole host of private individuals I will not be typing out.

The Gerkes own a vineyard and winery and they will be voting Yes on Amendment 1!

Want to know who is supporting the “No” side?  I like this graphic.

But HSUS? Aren’t they the Human Society of the United States?  Don’t they help puppies or something?

This Future Farmer of America will be voting Yes (or at least her parents will!).

The end of puppy mills, they say.  The end of factory farming.

But if you follow the work they’ve done you’ll see it’s much more than that.  They want to be rid of farming all together.

Don’t believe me?  Then take it from the horse’s mouth.  In a speech in 2006 the vice president of farm animal issues said “We don’t want any of these animals to be raised and killed… unfortunately we don’t have the luxury of waiting until we have the opportunity to get rid of the entire [animal agriculture] industry.”

The director of Animal Cruelty Policy (that thing they spend 55 million a year on) once said “My goal is the abolition of animal agriculture.”

HSUS isn’t a human society that takes care of abandoned kittens.  Last year they sent about 1 million dollars to local animal shelters.  Out of nearly 170 million.  They are a lobbying organization with millions to spend– against farmers.

So that’s where the money leads you.  And maybe, if you thought the wording was too open ended or the proposed amendment was too extreme, maybe you’ll understand where we as family farmers are coming from.

The Kelleys raise cattle on their family farm. They are voting Yes!

The Hursts are a muli-generational farm family whose grandkids love helping in the greenhouses. They are all voting Yes!

Help make sure this little guy can come back to 8 Story Farms someday, join his family in voting Yes! 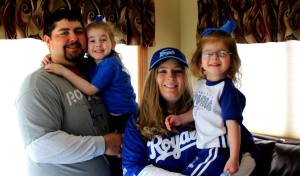 The Gregorys are voting Yes on August 5th as well!

This little guy is already planning to come back to the Whitt family farm, so his parents will be voting Yes!