I couldn’t believe it, but it’s true.  April is almost over!  Most of the time I’m anxiously awaiting the beginning of May so I can plant the seedlings I bought, um, in March, from the greenhouse when I just want green and growing things.  This year, besides being crazy-busy, I bought daffodils, shamrocks, hyacinths, and violas instead.  And although I did throw a few seeds in a raised bed back in March, I haven’t paid that much attention to the garden site.  So imagine my surprise to notice the rhubarb positivly overgrowing it’s bed!

I should have stood a child next to the plant so you can see how tall these stalks are, but here’s Brett posing with a few he picked.

Growing rhubarb is something of a new experience for me.  I decided to plant some four years ago when strawberries were on sale for a dollar a pint but rhubarb cost an arm and a leg for three stalks.  I was warned by several people that the little plant in its gallon pot would quickly be three foot square, but that was fine.  I planted it in a four by four foot garden bed and looked forward to strawberry-rhubarb everything.

The first year I wasn’t supposed to pick any and the next two years you pick frugally.  No biggie; three or four stalks twice a year was enough to satisfy my spring-time craving for pie.  Last year the goats ate quite a bit, but by then the plant was well-established and we still made several recipes.

Thankfully, there’s Pinterest.  I found a brilliant suggestion for Strawberry Rhubarb Sugar Cookie Crisp from Heather Christo.  I may never cook rhubarb any other way again. 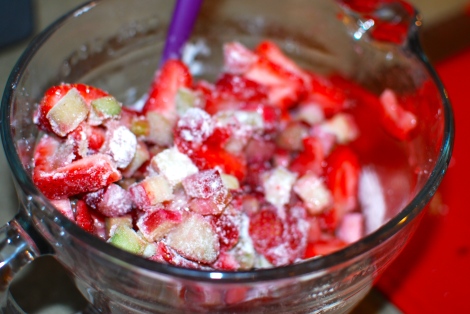 And it was easy!  Chop up some strawberries and rhubarb, coat them in flour and sugar, dump into pan.  Then mix up a sugar cookie recipe, roll it out about half an inch thick and lay it on top!  Much easier than a pie crust and soooooo delicious!

Her recipe makes a 9×13 pan, but I didn’t have that many strawberries so I put mine in a pie plate.