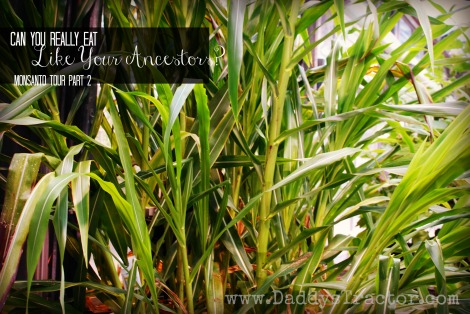 I’m excited to see you’re back for more of my tour of Monsanto this week! If you missed the first installment you might want to check it out before going any farther. You will also have to promise to over look typos and ridiculous sentences; I’ve been transcribing interviews for the blog that pays! 🙂

Hopefully you have an understanding of GMOs; let’s look at another term– GM.  You’ll see/hear people using the acronym, partly because two letters are easier, partly because we’re tired of the GMO backlash, and partly because it is trendy and we must keep up!  “Genetically modified” is sometimes used to show the difference between a seed whose genetic information is altered in a lab (GMO) and a seed whose genetic information has been altered by selective breeding, but in the U.S. you may correctly use it for both. Since plants no longer look like their ancestors, you can scientifically say that all plants are “GM.”

Here’s a poster from a greenhouse at Monsanto.  It shows what the ancestor of modern corn looked like.  Teosinte grain (red circle) resembles a stalk a wheat more than an ear of corn.  We don’t have a name or university to credit with the discovery, but they did find plants with fewer stalks used their energy to grow bigger grains and eventually the corn plant changed. 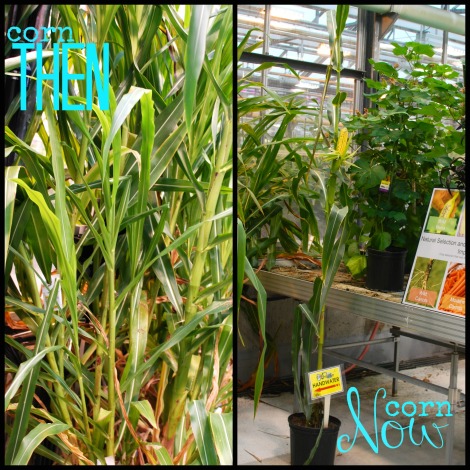 These are also from the Monsanto greenhouse.  The one on the left is teosinte, on the right -corn.

Genetic engineering today is the same- we’re just better and faster at it.  On our tour we saw pictures of college interns trudging through corn fields with a (highly scientific) hole punch.  The interns punched holes in the plant’s leaf tagged the plant.  The punched samples were analyzed to see which genetic traits the plant carried.  Scientists chose the plants with the best combination of traits to continue growing; the interns went back to the fields and pulled up the other 90%.  The remaining 10% were grown to be parents of a variety of seed that was more drought tolerant, or had stronger stalks, or yielded better etc..

Then somebody had a brilliant idea.  Since our DNA is present in all our cells, including the seed, the plant didn’t have to grow to torture students in a hot field. A piece of the seed could give all the same information.  As long as the chip doesn’t come from the part of the seed that is the embryo, the plant will grow, making more seeds of its own. 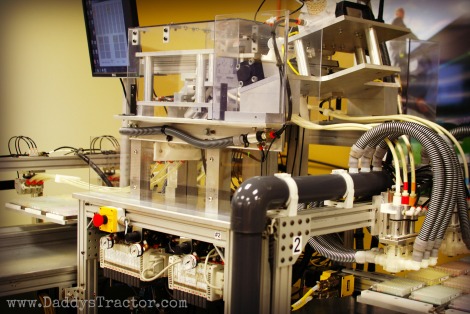 And since chipping seeds makes your hand cramp, somebody else thought up this contraption. If you take a soybean seed and shake it up, it will always settle with its black line (the embryo) parallel to the ground.  If you slice along the top or bottom, the seed will still grow.  There’s another machine for corn that takes a picture of the seed and a little robotic arm adjusts accordingly.  Seed chipping took two years off the time it used to take to create a variety with  a new trait.  So brilliant!

Plants created with this method are “genetically modified” without being GMO.  If the seeds are grown according to USDA guidelines the food they produce may even be “organic.”

So none of the food you eat is Paleo.  Those foods don’t even exist anymore.

And I bet early man would think we’re crazy for even wanting it.

One thought on “Can You Eat Like Your Ancestors?”